Summary of the plot of Woolf's novel: the main character Orlando, a nobleman, is born in the 16th century and lives on into the 20th century, changing genders along the way.

"Both Nino and I were intrigued by androgynous characters from the past. We talked about that for a long time. We intertwined them with Spanish traditional dance and music, such as jota and flamenco," Chaignaud says.

"It is fascinating to delve into the oral tradition of Iberian culture, and rediscover eccentric figures that have inspired people throughout time," Nino adds.

The Orlando from 'Romances Inciertos, un autre Orlando' is no longer a young nobleman living at the British court for four centuries. This Orlando devotes his entire life to writing a single poem, reflecting the stages he goes through. As in the novel, the character is prone to darkness. He suddenly disappears only to reappear later as a woman, in a different time and space.

"The play shows that you can interpret historical records without turning them into a pastiche. On the contrary: history offers new perspectives on contemporary society," says Nino.

Chaignaud nods. "'Romances Inciertos' can be seen as a miniature of opera ballet. Through the sophisticated balance between dance and music, we hope to convey pure emotions to the audience - which are most intense when strength and vulnerability merge."

"Music and dance are two alter egos here: they are in constant dialogue with each other and enrich each other, without one trying to dominate the other," Nino clarifies.

"The musical cast is un-be-liev-able”, beams Chaignaud. "The show is also a queer journey through costumes, sound and images that treat the past as a source of radical beauty and freedom. As in all my projects, I try to soften the boundaries between disciplines, gender and genres in this way."

An evening of impressive variety awaits you! ‘Romances Inciertos’ was highly acclaimed at the Avignon Festival, where Chaignaud was praised for his "androgynous talent". Come and see for yourself, next week at De Vooruit! 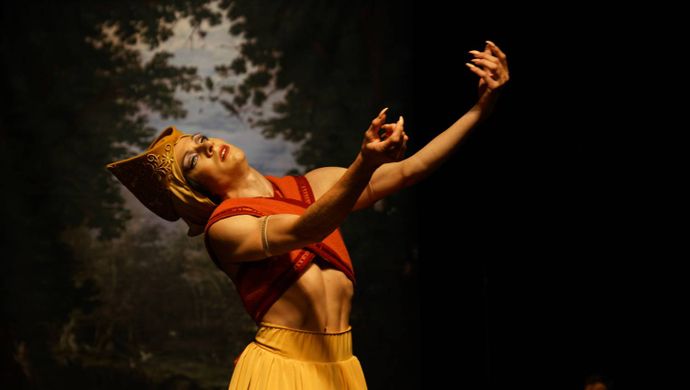