Vooruit was founded by the Cooperative Vooruit. The cooperative was the backbone of Ghent’s socialist movement.

Even before Vooruit’s creation in 1880, consumers and producers in Belgium and abroad had been experimenting for a while with cooperatives in order to more affordably provide for their material needs. The English Rochdale Equitable Pioneers Society was the prototype and other cooperatives, including Vooruit, copied its principles: based on their usage, members received a part of the profits and buying on credit was prohibited. The Ghent socialists who created Vooruit wanted to convert the masses to socialism through the cooperative. It all started with a bakery at the Zacheus tavern. Whoever joined could buy bread cards which could be exchanged for bread one week later. The price was a little higher than everywhere else, but a few times a year the members received a share of the profit, proportionate to the amount of bread they had bought. The profit was distributed as coupons with which they could buy products from the cooperative only – not just bread but soon enough also coffee, blankets and clothing. This allowed Vooruit to strengthen its economic position and the members to build up some savings.

Quite soon the Zacheus tavern became too small and the cooperative moved to a former factory building on the Garenmarkt, today known as the Edward Anseeleplein. A coffeehouse, a fabrics and attire store, a library with a reading room and a festivities and meeting space were added to the bakery. The building was a safe haven for the often vilified Ghent socialist family.

1910: The construction of Vooruit 'Festivities Hall'

In 1910 Vooruit bought a big residence and two adjacent houses in the Sint-Pietersnieuwstraat. This was to become the location for a new festivities hall. With this new cultural temple the socialists wanted to prove that they were no philistines, and that they cared about the intellectual development of the workers.The cooperative commissioned Ferdinand Dierkens to be the architect and he gave the workers a colossal “House of the People”. 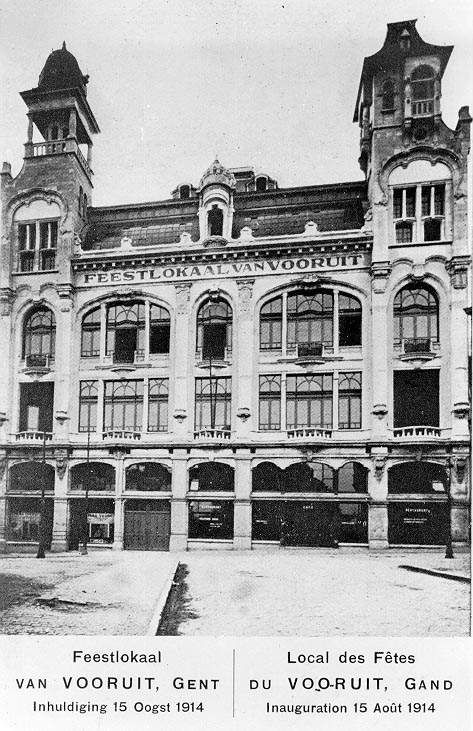 An eclectic and very complex building

All of this resulted in an eclectic and very complex building with a restaurant with a kitchen and reception hall, a library, meeting and rehearsal spaces, the Concertzaal (for 1000 spectators) and the Theaterzaal (for 1600 spectators). The phrase ‘Kunst veredelt’ (‘Art ennobles’) was written in gold letters above the stage of the Theaterzaal, emphasizing the goal of uplifting the workers intellectually. The stained-glass panel of the roof was decorated with the first notes of “The Internationale”, the socialists’ most famous anthem.

On May 1st, 1914 the socialists held their first May banquet in the Restaurant Hall on the first floor, in what would become a yearly tradition for the celebration of the May 1st holiday. 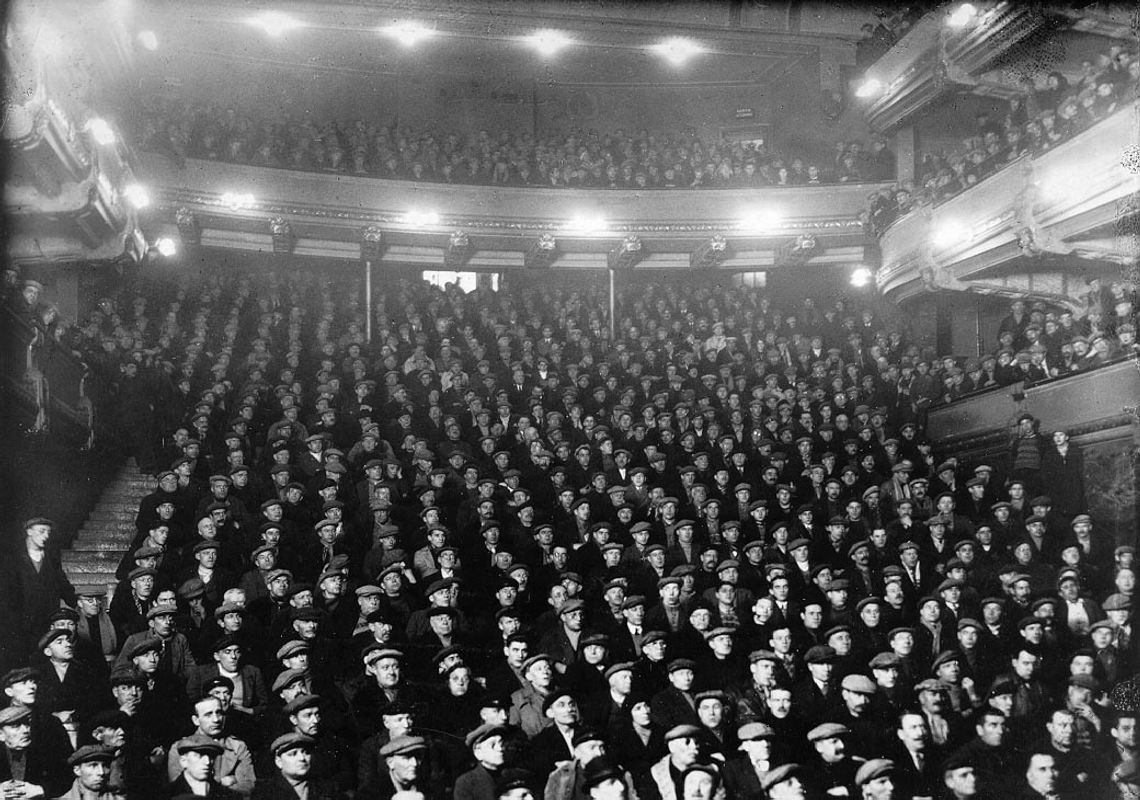 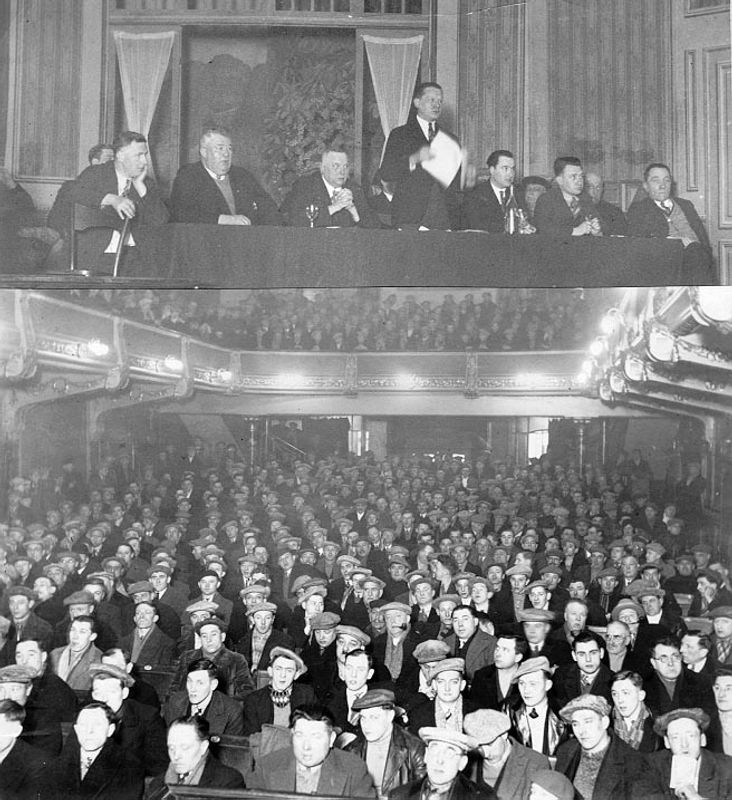 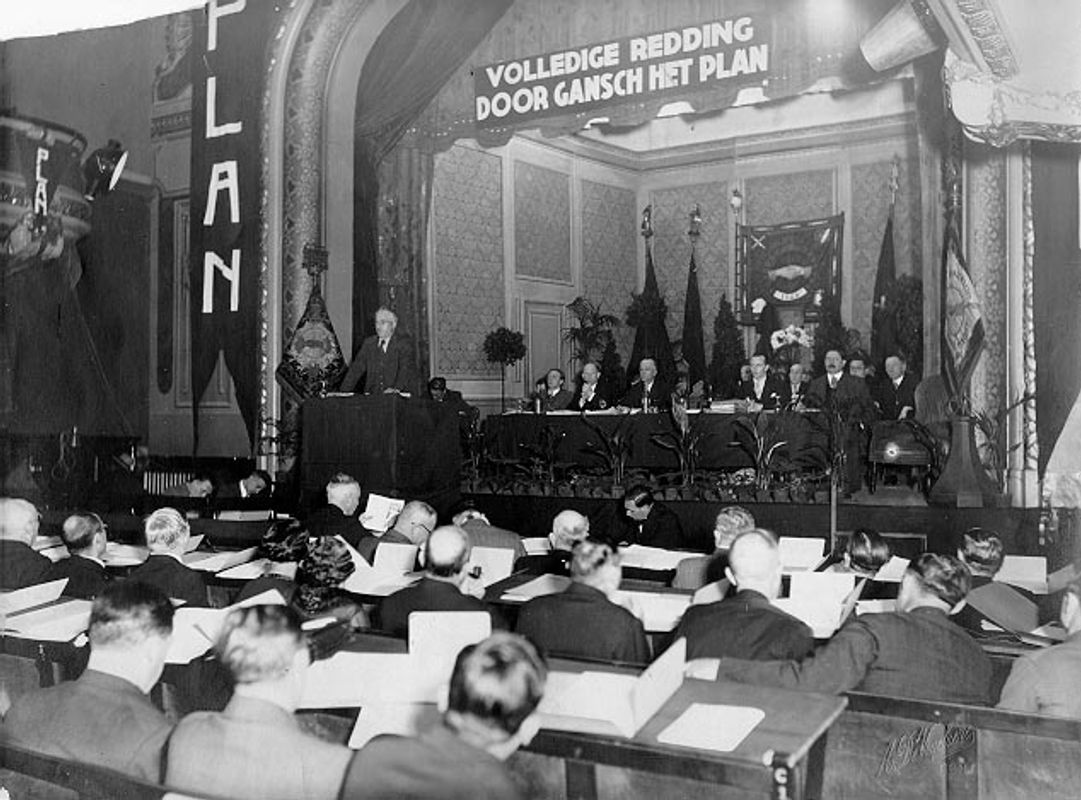 From October 1914, during the First World War, Ghent was an occupied city. Its inhabitants were subjected to a harsh occupation regime. For many workers, the Festivities Hall was a place where they could temporarily escape the misery. During the last year of the war the Germans requisitioned the Festivities Hall. They turned it into a Soldatenheim and apparently did quite some damage.

During the interwar period, the building became the hub of various socialist associations. During the 1930s most associations had a hard time retaining their members. The economic crisis was often held responsible for this, but the cinema’s success was probably also partially to blame.

During the Second World War, very soon after the invasion, the Germans transformed the Festivities Hall into a Soldatenheim and Cinema Vooruit became a Wehrmachtskino for the soldiers. The socialist organizations not only had to leave the building, many of them were forced by the occupiers to stop their activities and suddenly it was collaborating extreme-right groups who were holding their meetings in the Festivities Hall – talk about an ideological makeover.

After the Liberation, the allies turned the Festivities Hall into a recreation space for the troops, where they could go to the movies, among other things. The Canadians renamed it Café Québec. 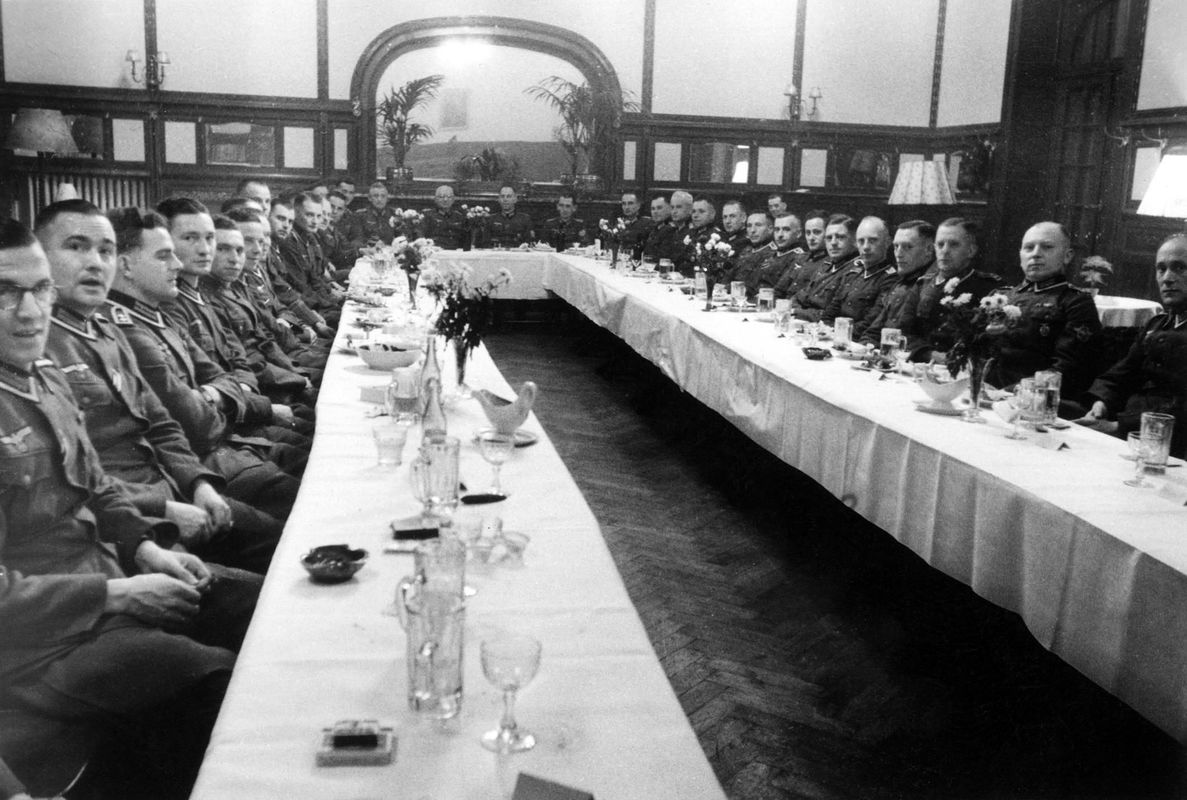 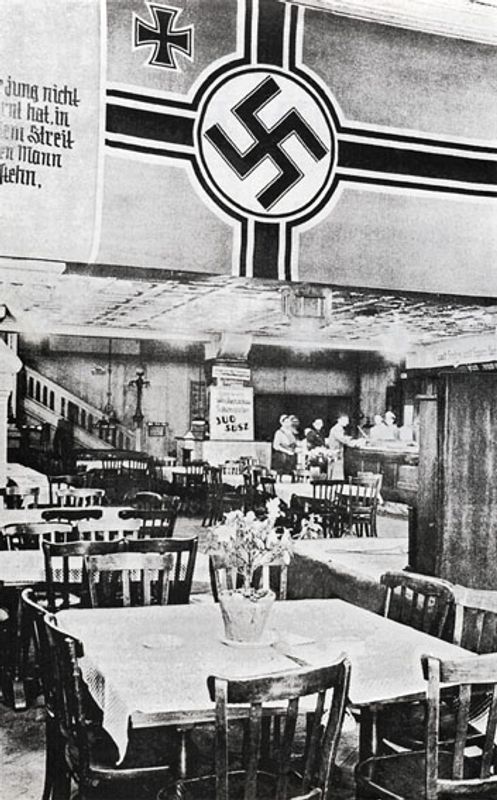 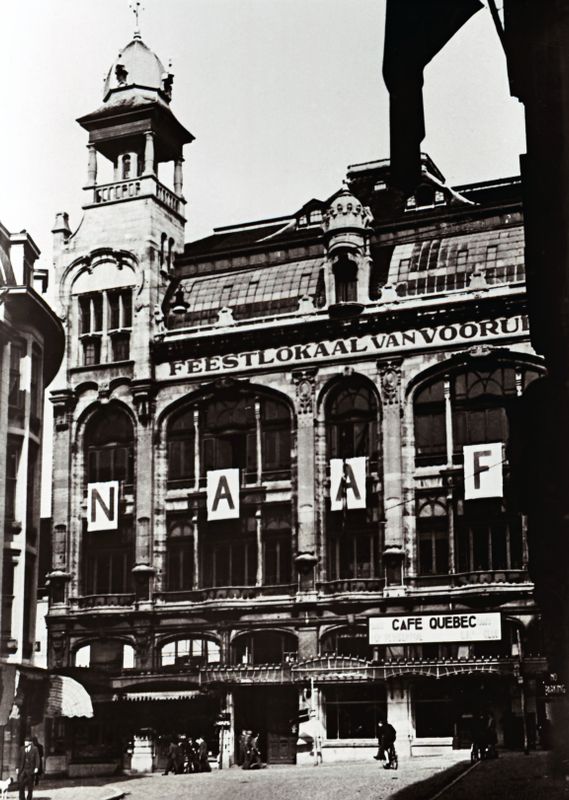 The Vooruit cooperative regained the Festivities Hall in 1946. After the war, the Multatulikring, Harmonie Vooruit, and the Rode Valken, once more transformed the Festivities Hall into a true beehive. A few new associations were also added to the mix: The Anseele Vrienden, the Studiekring Edward Anseele, a women's league 'De Samenwerkster', a women’s league, the Leesclub Boekuil, ... 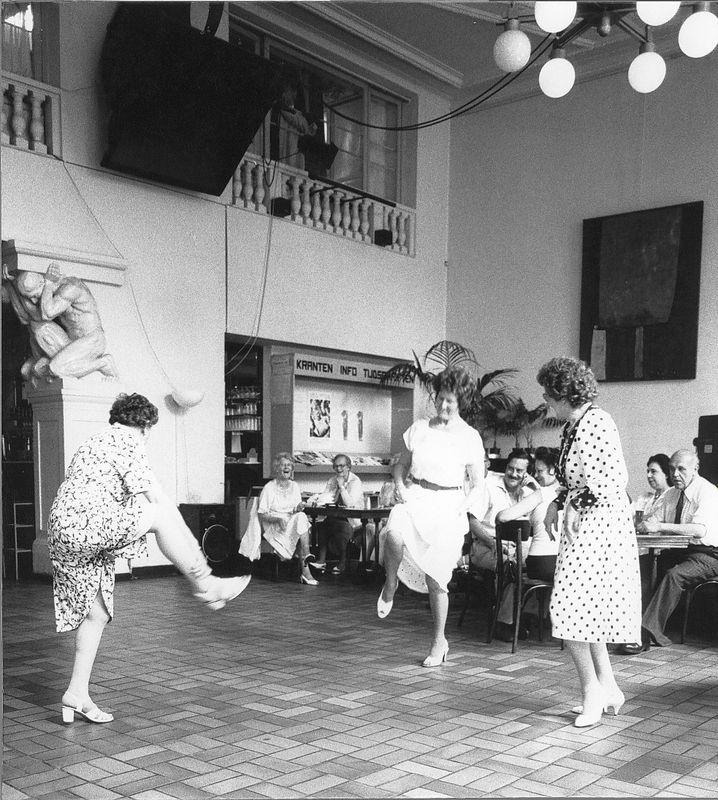 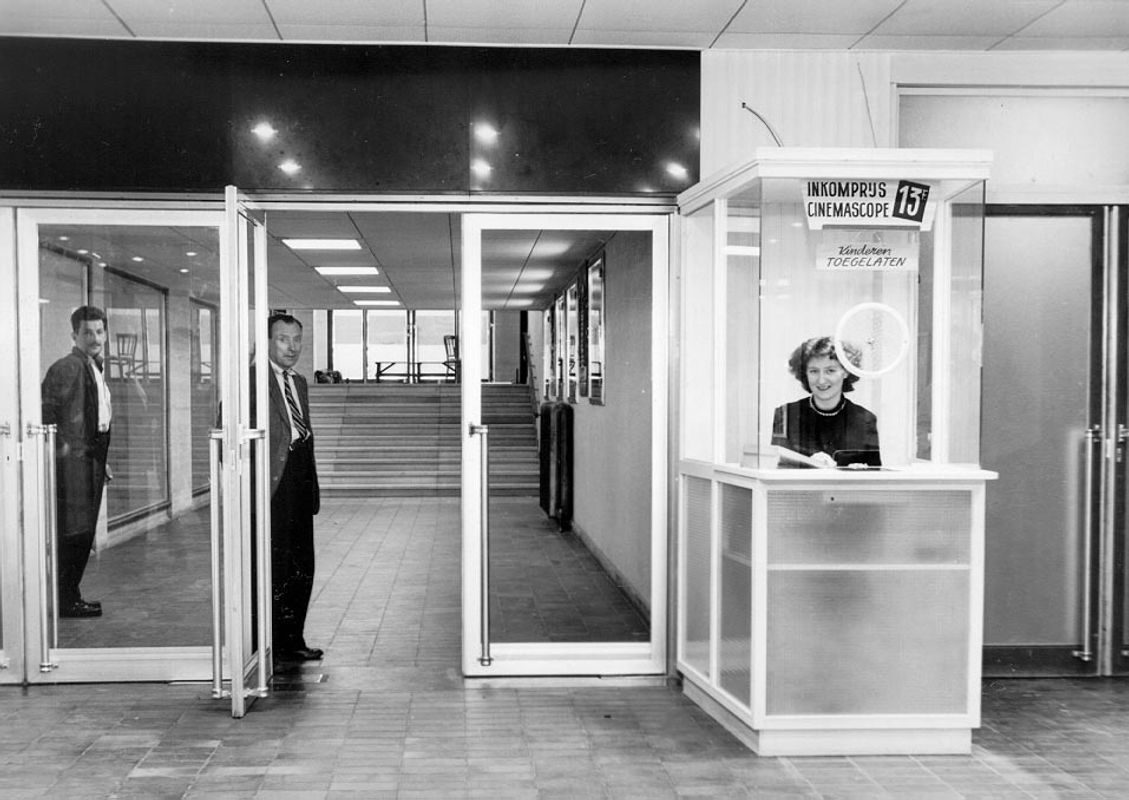 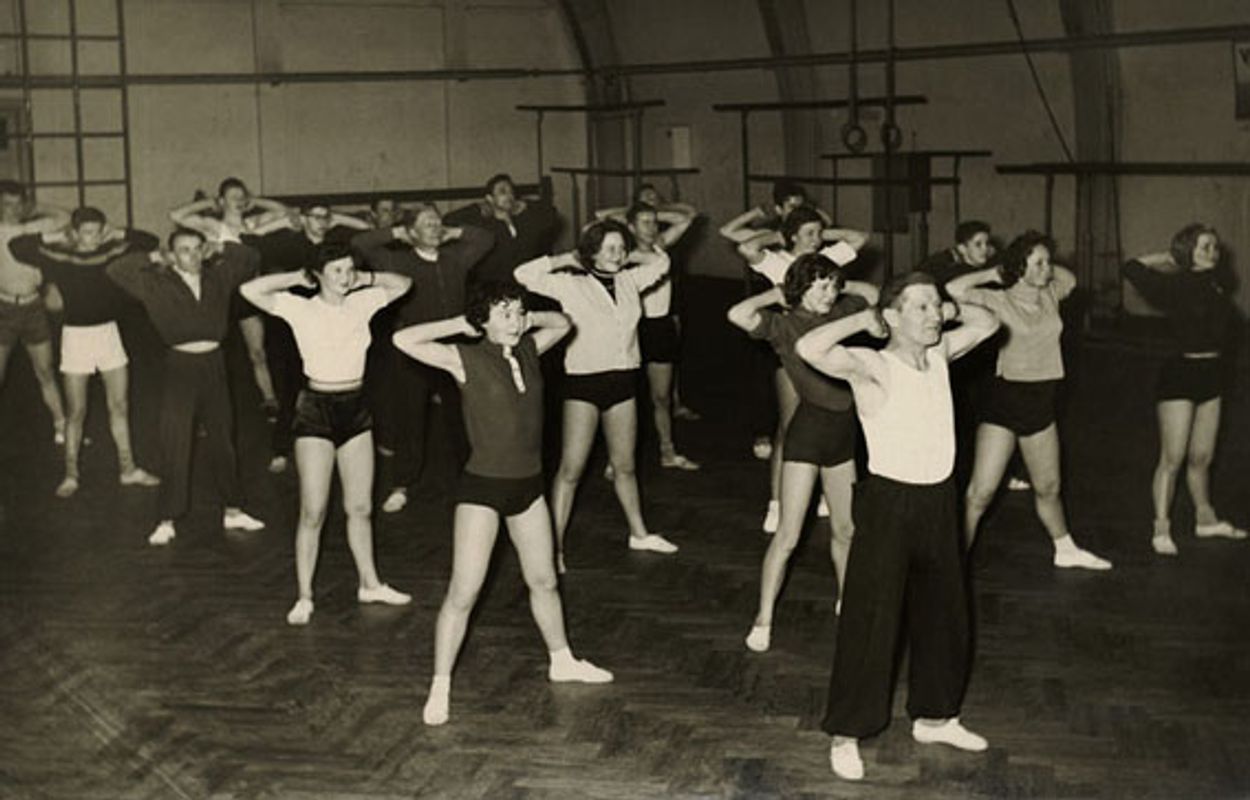 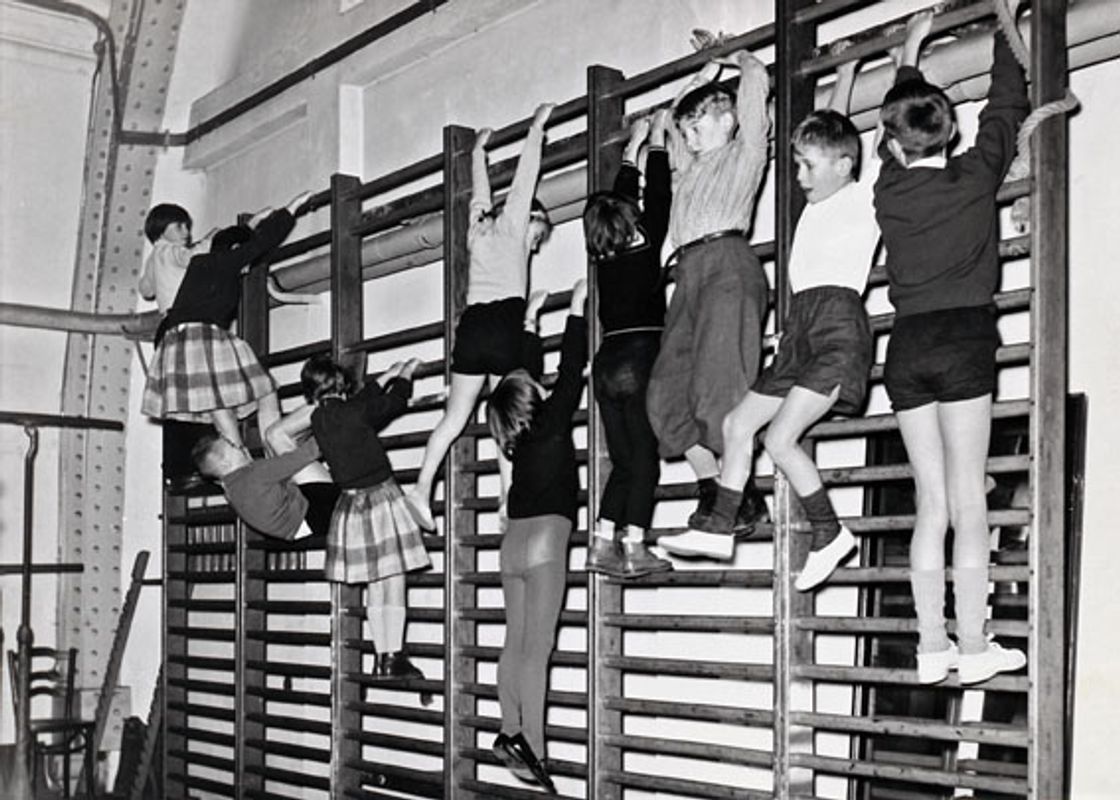 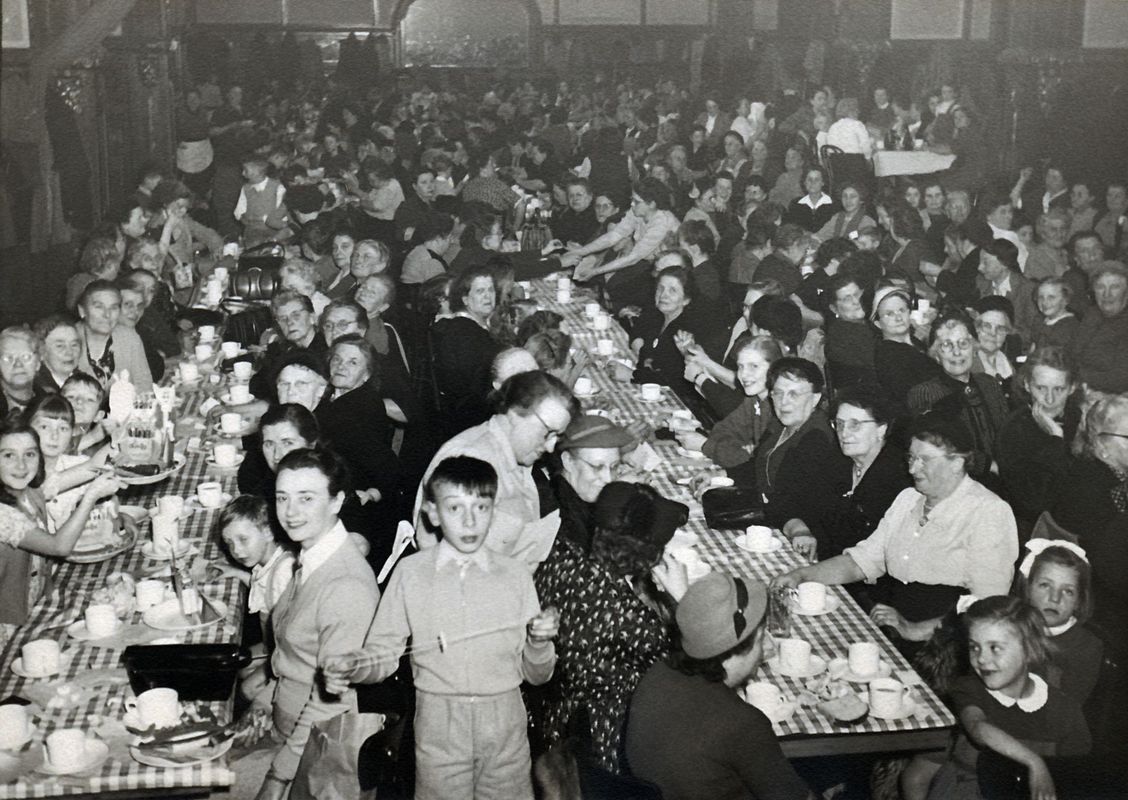 1970: The decline of the building & the exodus of the associations

Because there was less and less money to upkeep the building, more and more spaces were abandoned. There were water leaks, the fire security was lacking and many associations started leaving the building. In the 1970s, the café was one of the few spaces in the building that still had visitors, but its lively days were long gone. The seniors’ weekly dance on Sundays was as exciting as it got. 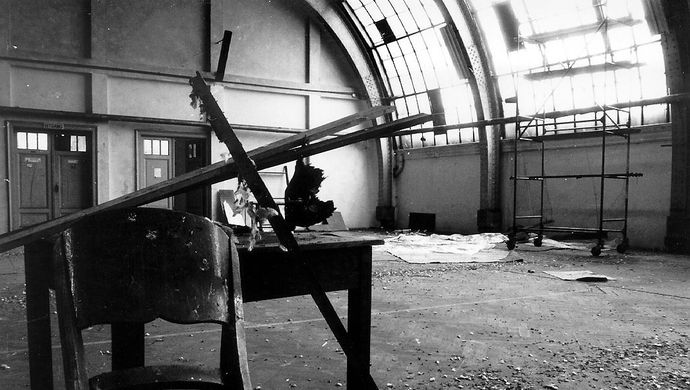 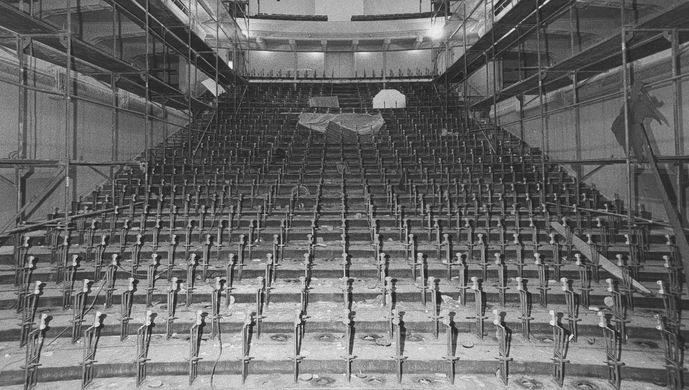 Everywhere in Belgium ‘Houses of the People’ were suffering the same faith and as cooperatives had a hard time staying afloat, neglect and dilapidation followed. Some ‘Houses of the People’ were repurposed, others were torn down. In 1982 a group of enthusiastic young people created the non-profit Socio-cultureel Centrum Vooruit (Vooruit Socio-Cultural Center) who planned to rehabilitate the entire building and use it as a progressive artistic meeting center. En 1982, quelques jeunes très motivés fondèrent le Centre socio-culturel Vooruit, chargé de rénover le bâtiment dans son ensemble et de l’exploiter comme centre artistique progressif ouvert au public. The promoters of the initiative wanted to get rid of the building’s “Red” label and considered the de-pillarization of the Festivities Hall to be a priority.

The young troops started with a major clean-up of the building. Thanks to the high unemployment rates at the time there were more than enough volunteers, who literally took out loads and loads of trash. 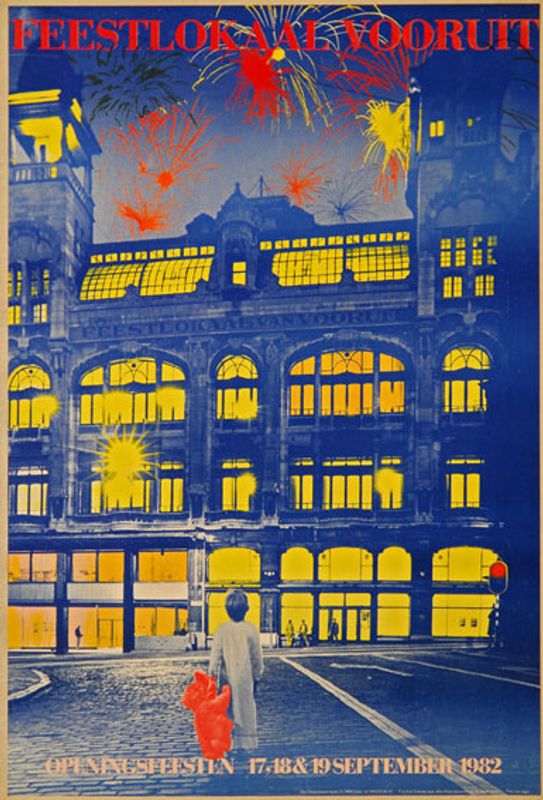 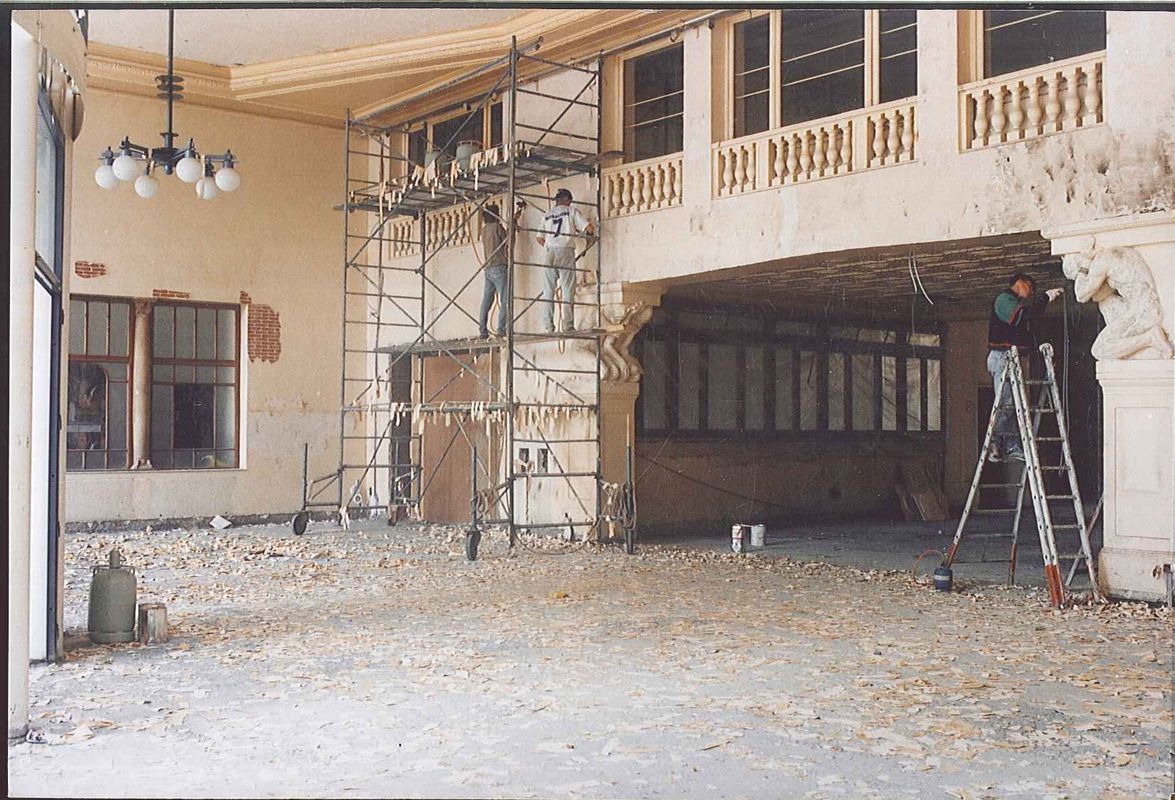 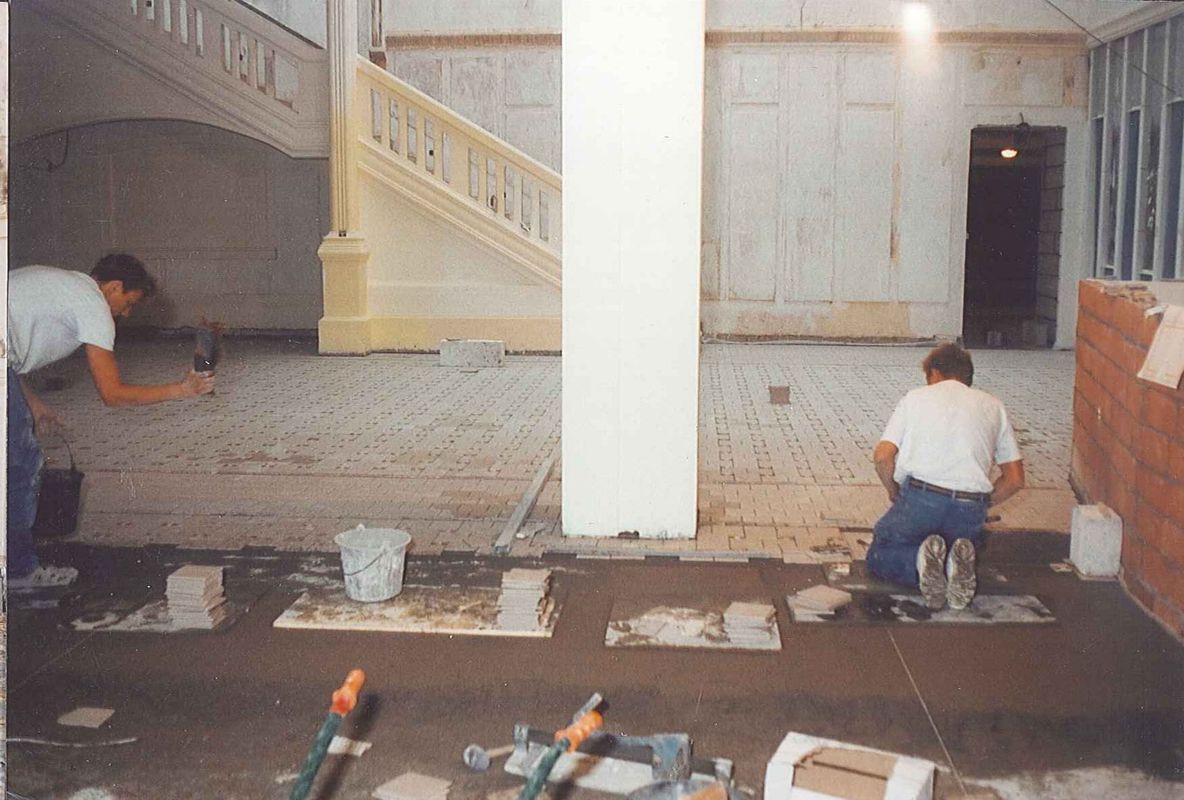 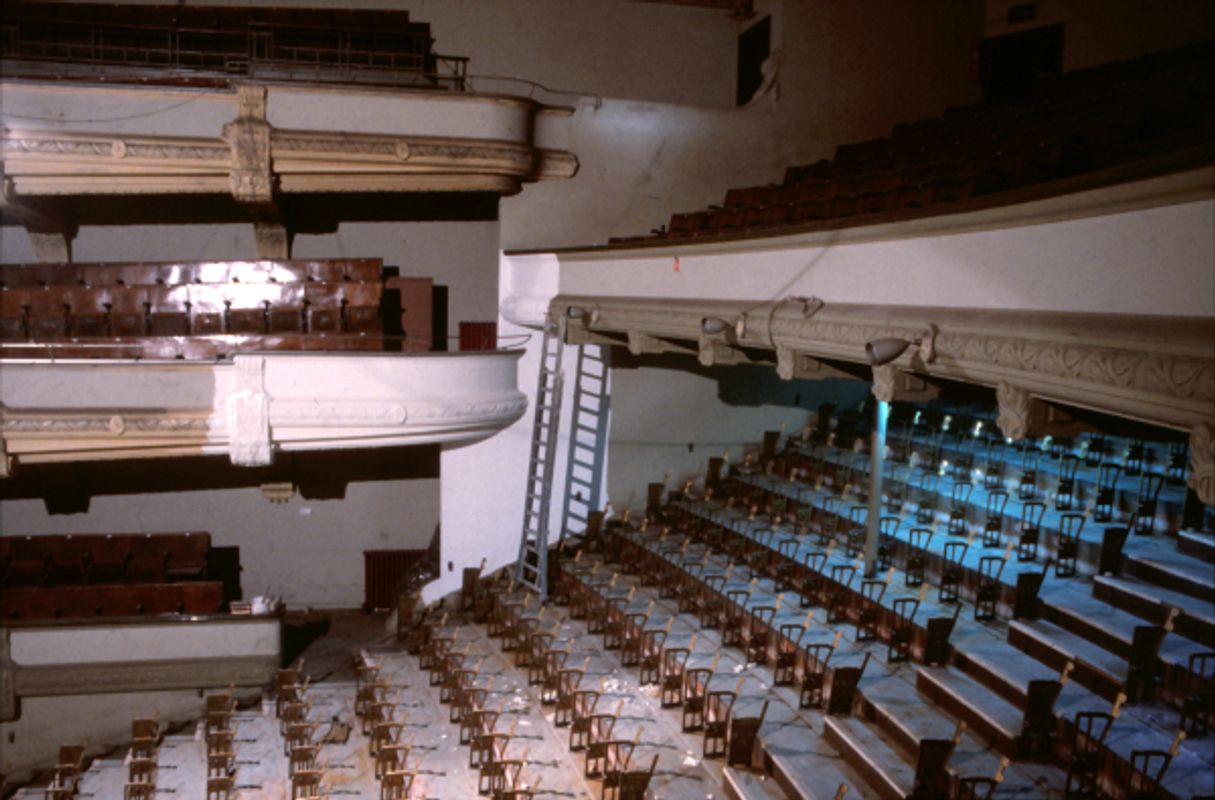 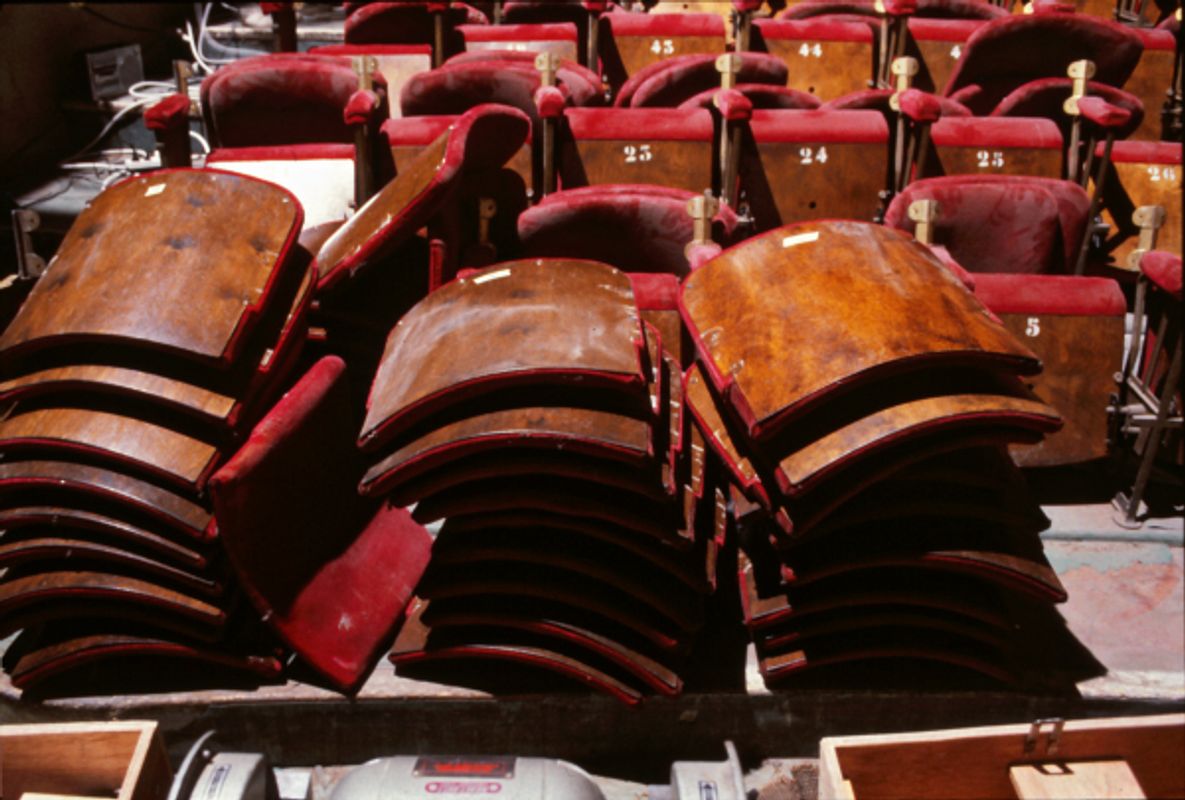 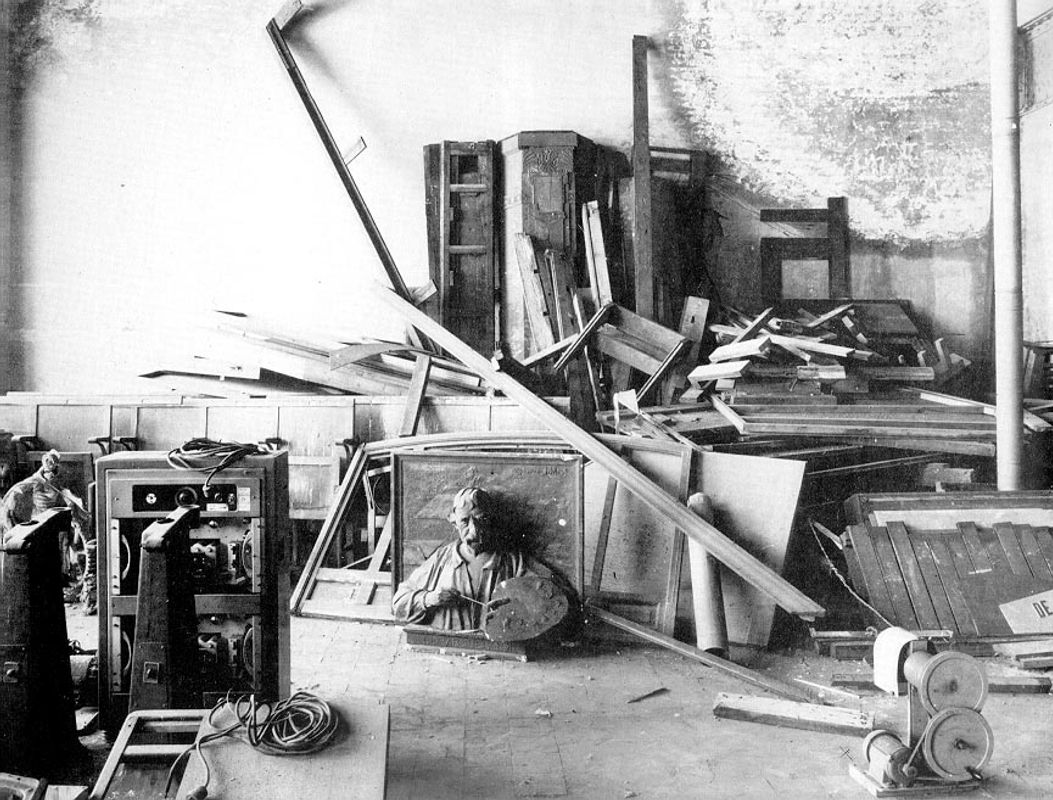 On September 17th, 18h and 19th of 1982, the building re-opened its doors. The public received a guided tour through the many hallways and chambers – speleology helmets included. There were performances, theater, and a ball for the elderly… The weekend was a success: it attracted thousands of visitors and massive media attention. During the weeks that followed the café was packed all over again. It became the ultimate meeting spot for anyone in Ghent who thought of themselves as progressive. After a few weeks pop and rock concerts began to be held in the lower hall.

The new Vooruit was mainly run by volunteers. In order to get some revenue the spaces were rented out for parties, dance and music classes and all kinds of other activities. Vooruit very much needed that revenue in order to maintain the building and to develop its own programming. In 1983 the Festivities Hall made the list of protected monuments, which then allowed the non-profit to claim rehabilitation subsidies.

In 1988 Socio-Cultureel Centrum Vooruit (Vooruit Socio-Cultural Center) was renamed Kunstencentrum Vooruit (Vooruit Arts Center). From now on its own activities were to fit a specific profile and its artistic policy had to become the number one priority, with a focus on innovative work from various artistic disciplines. The building became a place where local and foreign artists could come together to work on productions.

The Podiumkunstendecreet (Decree on Performing Arts) of 1993 put Vooruit on the list of officially recognized and subsidized arts centers, placing the organization in a much better financial position. More staff were hired and Vooruit’s functioning became more professional.

Innovative performances like ‘Ten oorlog’ by De Blauwe Maandag Compagnie, dance companies like Les Ballets C. de la B. and concerts by Nirvana, Red Hot Chili Peppers, ... resulted in a shift toward the center of the arts world. 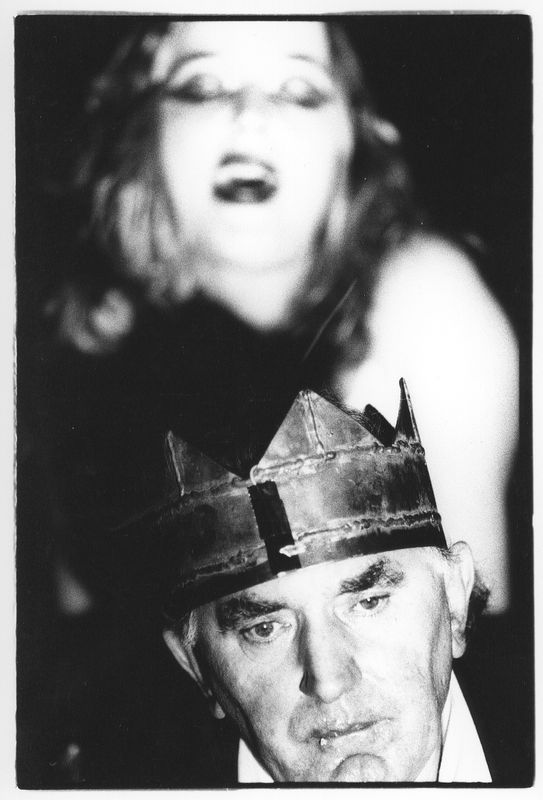 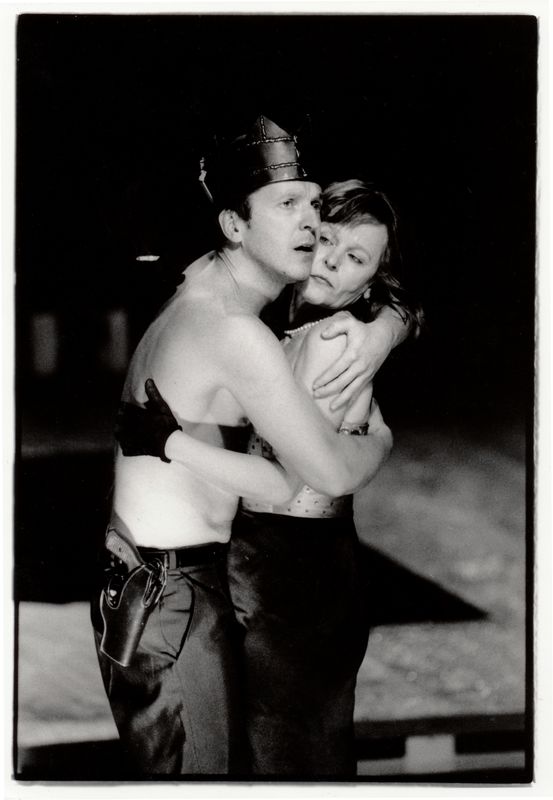 Today, with a staff of about 100 people and roughly 2,000 activities and 350,000 visitors each year, Vooruit Arts Center has become a major cultural institution. While it started out at the periphery of the Flemish performance landscape it has now become part of its core. Just like its predecessor, the Vooruit Festivities Hall, Vooruit Arts Center is a place of encounters, culture and social involvement. After more than one century above the Theaterzaal stage, the phrase ‘Kunst veredelt’ (Art ennobles), despite its pompousness, can today still be the motto of this cultural temple.